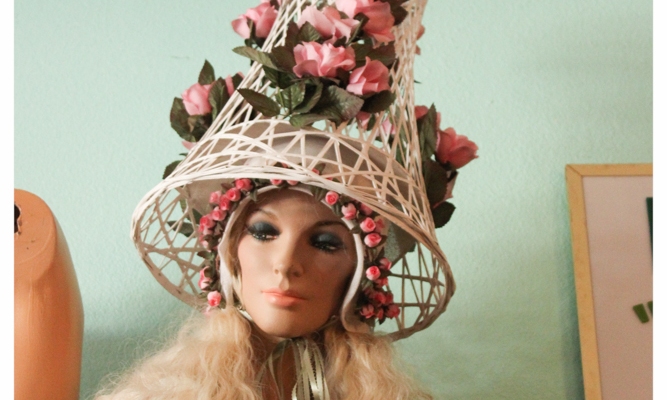 Some people just have it “together” and no matter what situation we face on the rocky path of life, there are those who roll with the punches and those that fight it. I had the pleasure of meeting someone on my trip that rolls like a stone, reminding me everyday why I embarked on this journey; my new favorite interviewee is famous Drag Queen and Project Runway’s alumni model, Steven LeMay of San Francisco (she still has the dress to prove it). 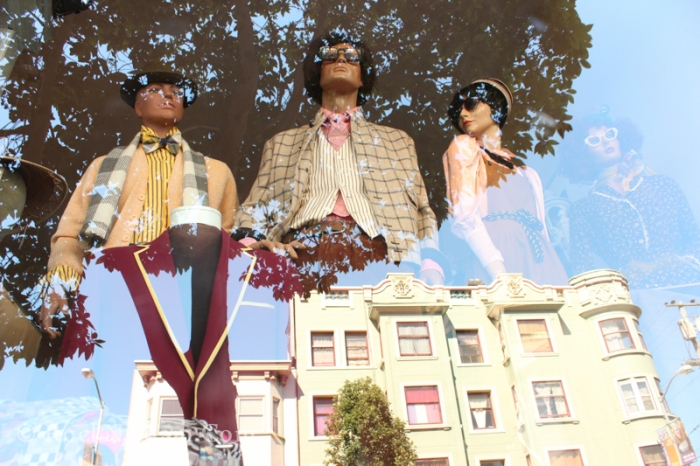 I enter the store which is lined with wigs of all color and volume, locked behind a glass case of dark wood, reminding me of an old sarsaparilla bar. The sales floor gives the remaining real estate to racks of vintage apparel and accessories. Ms. LeMay, not presently in drag, talks with a few regulars, her voice carrying throughout the store in a soprano-flamboyant and ecstatic way. 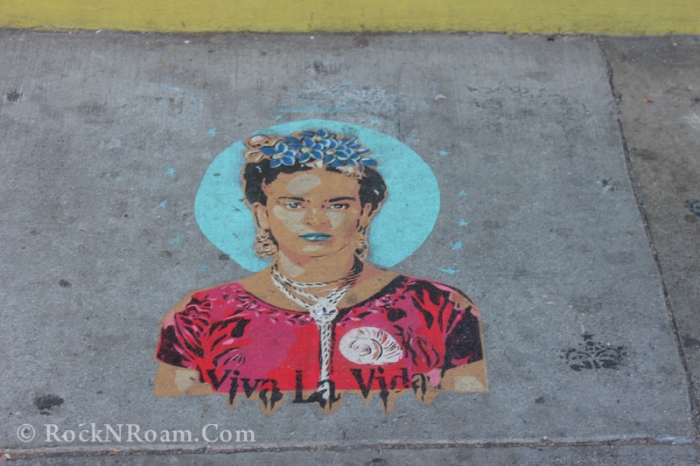 Ms. Lemay is on her 10th year of proprietorship at Retro Fit, a vintage costume shop previously owned by two women for 8 years in the heart of the Mission District, an area facing gentrification by the Google community take over.  Fear of being pushed out by the corporate turn-over in the once urban and hip neighborhood has local merchants concerned about their futures as previous staples in a wonderland of artists and transients. Ms. Lemay schools me on the history of San Francisco entrepreneurs and how to appreciate what you’ve accomplished and be in the present moment because we don’t know what tomorrow will bring.

RNR: How did you come to own Retro Fit?

SL:  I had just lost my job… I was working at Costumes on Haight and I left there, rather abruptly, and so I was walking by the bike shop next door and within one weekend (snaps) they were gone! So I walked in here and I was like, Please hook me up with your landlord, I’ll be your neighbor, I’ll do costumes, you can do vintage, it will be great!” And they joked, “Well, we might have to do that, we might want to sell our business or just close…” and I said, “Well, if you sell it, I will buy it.”  And at the time it, was still a community neighborhood and it was fun, like, Oh yay, I’m the neighborhood vintage store!

Then the recession happened which you know, ruined everything and murdered business and then lots of construction started happening.  It was like a trial of patience. Luckily, ten years later, I survived. So, I’m hoping, now that this neighborhood has become trendy as, all the tech-people have moved in, it’s going to get better.  It’s bad because they’re driving up all the rent and us small business owners can’t pay the $3000 rent increase and someone else is going to come in who can.  The merchants association is really good in that no chain store can come in here without having to apply for a permit first.  But companies like Jack Spade subverted the issue, claiming that they are not a chain because there’s only 10 of them, not 11, or whatever but, they’re still part of a major chain/corporation and that’s how these businesses buy their way in and ruin what was essentially a good neighborhood.

RNR:  How do you compare The Mission and The Haight districts?

SL:  The Haight was the beginning of it all because that’s where the summer of love started in 1969. The Haight has had 40 years of being able to figure out their shit, the Mission was sort of a neglected neighborhood until possibly about 10 years ago. So, we’ve only had a few years to figure out what’s going on here and people started to see the potential for what could happen here.

And the whole thing with vintage, if celebrities weren’t wearing recyclables, then it would still just be the artists and the hippies and no one would give a fuck. Now we have to compete with the internet because everyone is selling it on ebay. The thing that bothers me is that anything can turn out to be a rich person’s business.

The Mission was known for being a slightly poorer neighborhood and hence it had thrift stores.  So, I’m pretty sure it was the lesbians that moved in first because they said I don’t give a fuck and no one is going to fuck with us and you know, they’re handy and can fix things…and so it’s really due to the lesbians and the artists. I mean, the two girls that started this business 18 years ago were ahead of their time, and thanks to them, this neighborhood is what it is.  So, I don’t think there’s any difference in the vintage stores in that neighborhood vs. the ones in this neighborhood. The Haight has its history though, so it gets a lot of tourism. 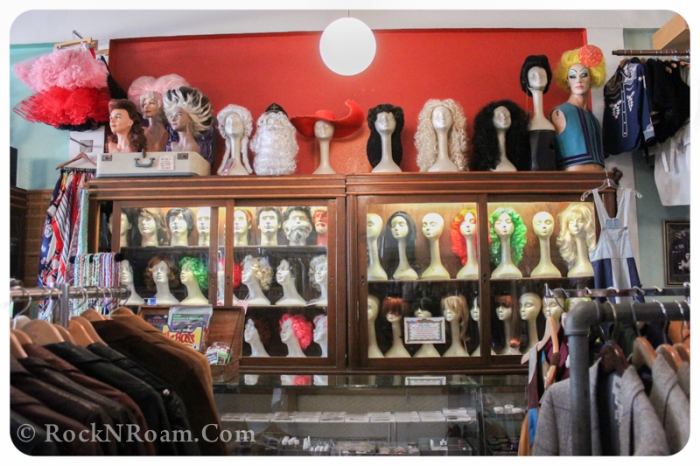 RNR:  Over the last 10 years, how have you changed or added to Retro Fit?

SL:  The girls had a lot of 60s and 70s (inventory) and they had a good mix of men’s and women’s but, they had no costumes and no wigs and make up. So, because of my love of costuming and acting, and my knowledge that there were not as many shops carrying the product…

(We get interrupted by what appears to be a street person)

Street man:  “Hey man, I’m out of the spider business, but, I got this alligator foot if you wanna buy it!”

SL:  “No, I don’t need an alligator foot today…” (back to me) So, that happens all the time, what was I talking about?

RNR:  How you changed the store… 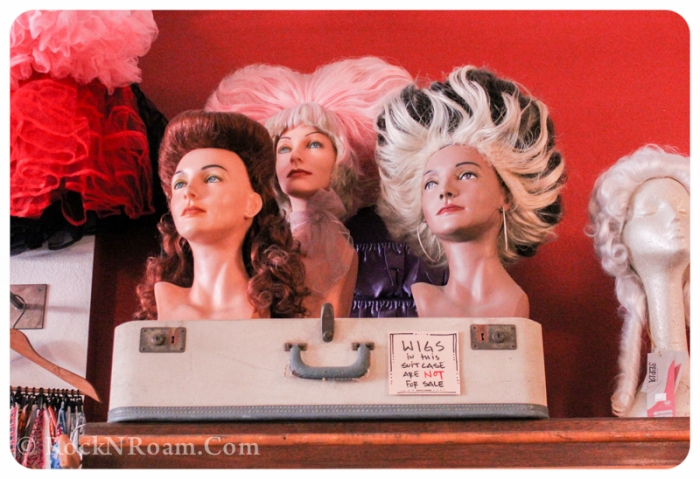 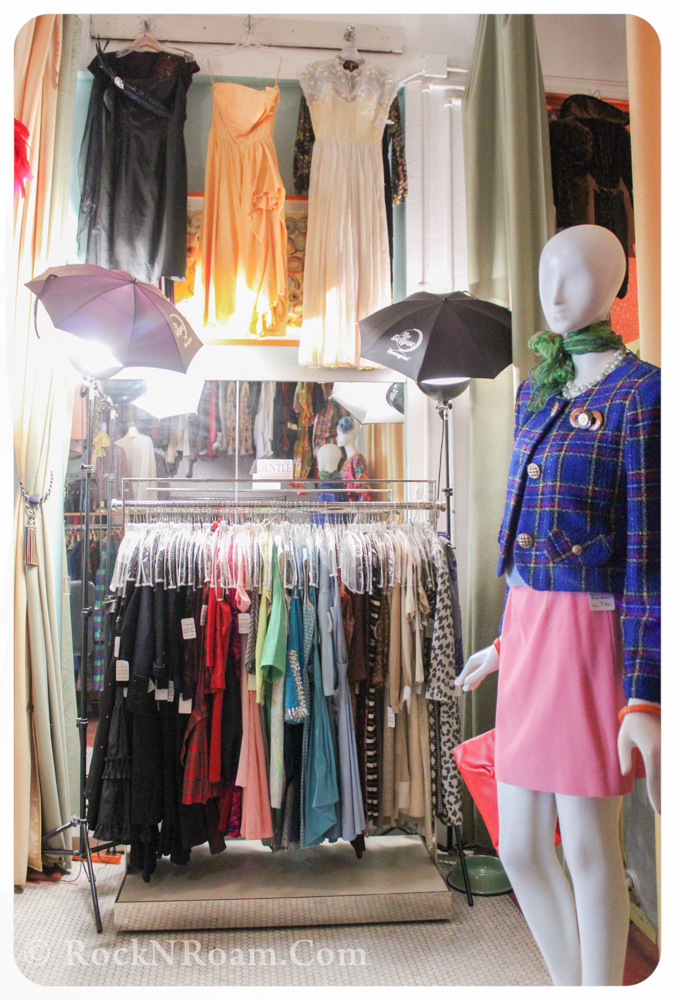 SL:  Oh right, so I couldn’t believe that there weren’t many places for people to go get costumes so, I knew immediately I needed to do costumes. I know a lot of performers and artists live here so my first thing;
A) I wanted to make the inventory older, not only because of my love of the 40s and 50s but, because the quality is better, and usually, it’s made in America.
B) Next I brought in the wigs and the make-up and then soon the performers started coming in to shop and that would help sell the clothes.  Next I started handpicking costumes that you can rent. 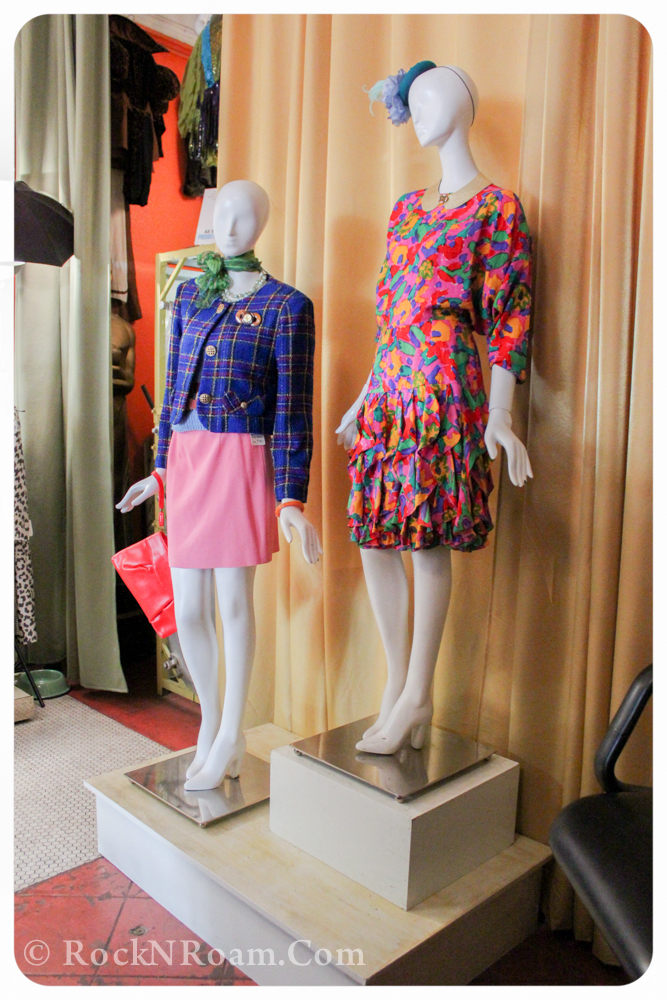 RNR:  Who are predominantly your customers that come in to rent costumes?

SL:  Our biggest customer, regardless of the Gatsby remake that came out, is the flapper dress wearers.

Up on a platform in the far back of the store high above the dressing room is a display featuring a dress that screams attention, and not in a good way, I inquire about it.

RNR: What’s that dress that looks like a sparkly green pickle?

SL:  I was wondering when we were going to get to that! Season 5 of Project Runway, they had a drag queen episode and I was one of the models, it was called “Good Queen Fun” and that was the hideous dress I had to wear. Despite the dresses ugliness, Nina Garcia said I was beautiful. It’s almost indicative of my life, you know, you almost get that far but, you never really get there. I’m not going to be someone’s muuuse and Karl Lagerfelds never going to come and say “You! Come walk for me!” And everyone else is like, “Oh that poor girl and her lizard costume!”

Steven informs me that he is part of a fabulous local show that does a drag rendition of Sex and the City (the flyer is displayed in the window).

RNR:  Where do the girls get their costumes?

SL:  Each girl is in charge of her own costumes and it’s hard enough to get women’s clothes that fit when you’re a man but, it’s even harder when you’re a bigger man. So, one of them has someone make the costumes and others are still just small enough to buy off the plus size racks.

RNR: How do you guys put on make up so well? 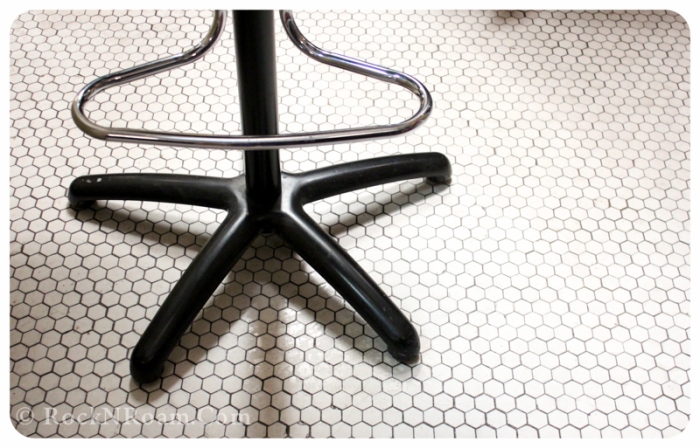 SL: It’s interesting, a lot of it is trial and error.  It depends on what kind of drag queen are you.  If you’re an old school drag queen you learn to do it yourself but, now you usually have a “drag mother”.

SL:  Right!  So, you have your drag Mom and that is basically the person who introduces you to it. It’s a fine art. 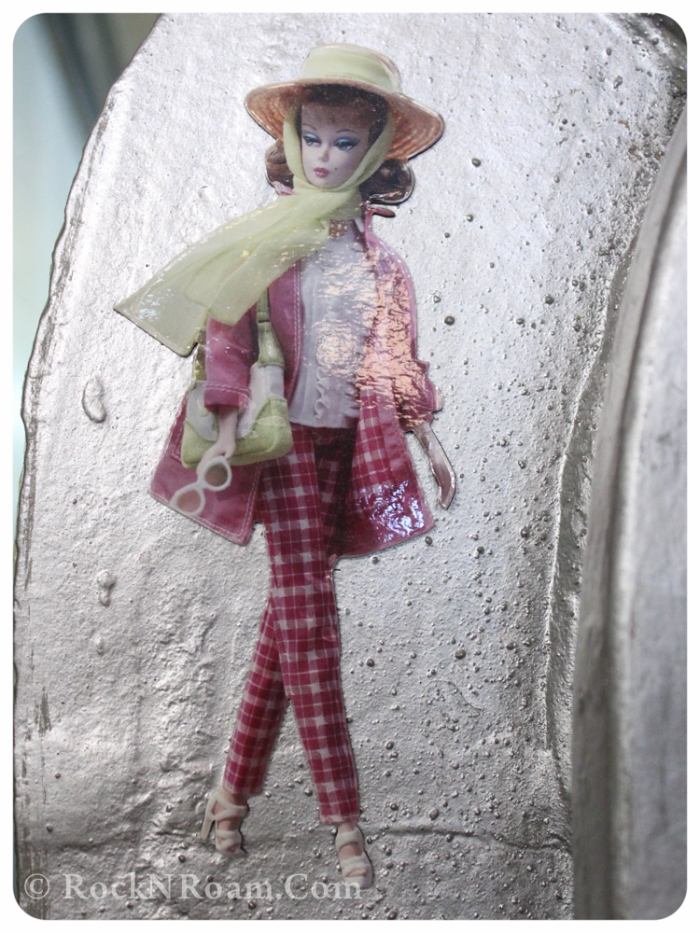 RNR:  What do you see in the future for vintage and you? Are you going to maintain the costume presence?

SL: Who knows, I hate to even say this but, if I was forced to vacate this space, it could be a blessing in disguise.  ‘Cause maybe I’d find a bigger space that’s cheaper in a not-so developed neighborhood. I had two friends pass away in the last year that were younger than me and so, these things make you change your perspective on life.  As much as I love what I do, this is not me. This (showcasing herself with her hands) is me.  And the light bulb went off and it was like, Honey, the most important thing you have is this (pointing to herself again)! The worst case scenario, I go back and live with my Mom in New Hampshire and drink margaritas and watch endless cable television.  You know what I’m saying? You have to be really fluid with life, you can only control your response to things that are put in front of you.  I’m not gonna stress something 6 months from now, until 6 months from now (referring to possible future rent increases or evictions).

But, you know, if this is poverty, then I’m ok.  Cause you know what?  I’ve had a wonderful life, I have a great store, great friends, great things, I modeled on television, I mean, really, if that was the worse thing to happen, that I wouldn’t be a small business owner, then that’s really not the worst thing that can happen. Life goes on and so, if you really get that and understand that, you’re a bit better off.